You are here: Home > Zachrilege Cast > Orange Bowl with no pulp
By Zach Law on January 6, 2010 in Uncategorized 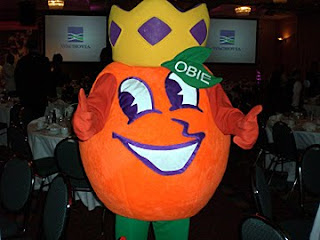 The BCS has cleared up the national title picture, but it’s killed the Orange Bowl. It’s funny now that the stadiums named for the bowls are disappearing. The Orange Bowl is now played at Landshark Stadium, and the stadium that used to host the game is now a parking lot. The Cotton Bowl will go to uber Cowboys Stadium next year, as Texas Stadium will be the first sponsored
implosion.

In the previous decade, there were three national champions crowned in Miami. The other games were on the other end of the spectrum. A Rose Bowl West matchup of USC and Iowa in 2003 was interesting, but for the most part a mediocre slate of ACC teams watered down the games. Miami beat Florida State in 2004 but no one cared. Even the national title games weren’t exciting. Oklahoma beat down Florida State. Remember when Oklahoma was clutch in BCS games? USC demolished Oklahoma in 2005. Last year, Florida beat Oklahoma in a game that should have been closer. Virginia Tech was the sole ACC team to win, and they beat Cincinnati. Louisville beat Wake Forest and one-hit wonders like Maryland and Kansas crashed the party.

Last night’s game was a new low. Georgia Tech’s option was to be showcased against an Iowa team that was in the game mainly because of the number of fans who could show up. The joke was on them; it was the coldest Orange Bowl game in history. Iowa figured out the option. Georgia Tech made a solid effort to rally but couldn’t slow down the Iowa “attack”.

The Rose Bowl still has cache because of tradition. The Orange Bowl has none because the ACC champ used to go to the Gator Bowl, usually has at least two losses, and their normal opponent is from the Big East which may be even less of a national player. There was hope when Virginia Tech, Miami, and Boston College moved over. So far only Tech has made the big game. Maybe when there’s a plus one or playoff system this bowl will return to the glory days.

Missouri played in this game in 1940, losing to Georgia Tech. They went to consecutive Orange Bowls in 1960 and 1961. They lost to Georgia and beat Navy. That’s right, Navy, we beat you when it really mattered. They also lost to Penn State in the 1970 game. Missouri should have been in the 2008 game, but the Big 12 decided to reward Kansas for playing nobody and losing to Missouri.