You are here: Home > Zachrilege Cast > Chris Johnson is THE Offensive Player of the Year
By Zach Law on January 13, 2010 in Uncategorized 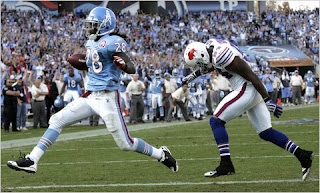 Chris Johnson won the AP Offensive Player of the Year award today. He got 38.5 of the 50 votes. Drew Brees got 9, Peyton got 1.5 and Rivers got 1. That’s right, Titan fans, flash back to the controversial McNair/Manning co-MVP result in 2003. Someone has a sense of humor.

What’s the difference between Offensive Player of the Year and MVP? The MVP award appears to be really the ‘best QB on a team with a good record’ award. The offensive player of the year award goes to the guy with the coolest stats.

CJ had 358 of the 431 running back carries this year for the Titans. LenDale White, who was number two, had 62 carries and 12 of them after week seven. CJ was a workhorse in a league that has very few of them. Actually the league might have three at the moment.

Both awards should be limited to quarterback or running back. The offensive player of the year award has gone to a non-RB or QB twice, and that was Jerry Rice. In 54 years of the AP MVP award, a non RB or QB has won three times. Allen Page, a defensive tackle, won in 1971, Lawrence Taylor won in 1986 and the strangest MVP of all time has to be kicker Mark Moseley in 1982. It was a strike year.

Note that there are multiple MVP awards and I used the AP for consistency’s sake.

Manning is the all-time MVP leader with four and probably will win one or two more if he continues to have a pulse. Two players in history have three straight OPYs. Earl Campbell won from 1978-1980 (along with the 1979 MVP) and Marshall Faulk won from 1999-2001 (MVP in 2000). Chris Johnson, there’s your goal.