You are here: Home > Zachrilege Cast > Boring in HD is still boring
By Zach Law on January 30, 2010 in Uncategorized 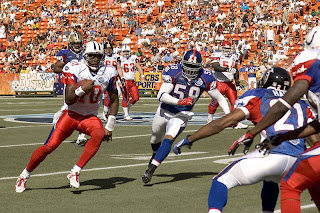 When I finally got my big TV up and running, the first thing to do was check out the NFL Network in HD. HD is nice, but Rich Eisen and Deion Sanders in short sleeves interviewing guys is far from compelling. Later I saw the documentary on the AFL and that was much cooler.

I’ll get to see a few Titans “in action” tomorrow night for the last time in a while. I want to see Chris Johnson to primarily make sure that he doesn’t get hurt. I assume he’ll tear up the opposition, or guys might get up to tackle the rushing champ. Vince Young was awful in the 2007 Pro Bowl. I’m sure that he wants to make amends. Is anyone else a less likely Pro Bowler? You could have taken 1000-1 odds when the season started.

I enjoy the BS Report. Today Mr. Simmons talked about his upcoming appearance as an announcer for a bowling tournament. I was about to tune out until I he changed the subject with guest Rob Stone and talked 2010 World Cup. That’s going to be a lot of fun. As is Sports Guy’s wont, he mentioned the potential fantasy implications. Get eight guys together and have a draft of countries. Everyone gets four and they become your team. I doubt I could find eight guys who were interested. I couldn’t even get more than half of my local keeper league to join a fantasy playoff league. I always set it up and winning is never that sweet since four people end up participating by the final week.

I suppose that the labor strife and the upcoming draft should keep me interested. I think I can back off for a while and catch up later. Other than the Super Bowl, talk to me in April and we’ll see how things are going.