You are here: Home > Zachrilege Cast > Another lame take on the Super Bowl
By Zach Law on February 8, 2010 in Uncategorized 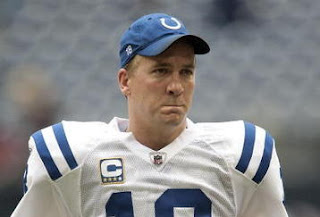 Chris Johnson probably didn’t enjoy last night’s game. That’s because the run game is dead. It had some death throes during the Jets’ playoff run but it flatlined last night.

Both teams played “their” games. The Colts passed at will and had a key goal-line stand. The Saint passed, passed, passed. The Colts were either moving the ball up and down the field or going three and out. They didn’t stall out. The Saints played steady, knowing that they had the entire half to enact the game plan.

Everyone’s talking about the onside kick and deservedly so. Just as important was the Saints stopping the Colts after the goal-line stand. If Peyton can lead the Colts to an end-of-half score, the Saints would have been in big trouble. Instead they made the stop and got points. Momentum was theirs and after the onside kick they rarely relinquished it.

In the championship games the teams with the better run games lost. The Vikings and Jets played to their peak and still fell short. If it weren’t for Sir Fumble A Lot, formerly known as Adrian Peterson, the Vikings would have prevailed.

Look at the last few Super Bowls. Where is the dominant performance by a running back? This year’s starting running backs barely combined for 100 yards. Last year’s Super Bowl starters were Edgerrin James and Willie Parker. I’m going to have to look and see who the last 100-yard running back in the Bowl was. Probably Parker, ironically enough.

The common discussion last week was that Peyton Manning was one Super Bowl win from being the best quarterback of all time. It was hyperbole, but by kickoff it was just about established as fact. It was over the top, and so is today’s talk that Peyton Manning is a descendent of the dinosaur Chokasaurus Rex. To my knowledge, less than ten quarterbacks have ever won at least two Super Bowls. Manning would have been in select company had his team won. There might not even be ten quarterbacks who have been to multiple Super Bowls.

Let’s get over this discussion of clutch. Had Asante Samuel not dropped an interception or had Eli Manning not avoided two sacks, the only two sacks he’s avoided in his life, or had David Tyree not caught that crazy pass, the Giants would have lost. He played through the circumstances and the near misses and won. I think his defense had a lot to do with the win as well. With less than four minutes left, trailing by a touchdown and playing a defense that was gambling like a drunk guy on a hot streak playing craps, a lot of quarterbacks would have fallen short. The slant might have been a little too obvious and Reggie Wayne might have been a little more injured than people knew.

Tom Brady was thought to be invincible in the playoffs. He looked not too different from JaMarcus Russell in his last playoff game. He still has three rings and has been to four Super Bowls. Only one other quarterback has done that. But it’s cool to say that now is the best time ever and the players we’re watching are the greatest. That’s fine. Just don’t go overboard. Brady gets this decade. Considering how little he gets hit, Manning might own the next. For now, Brady wins. As much as it makes me want to barf into a wastebasket, the Patriots are the team of the decade. The Colts are the Braves of the 90s.

There are plenty of teams who wish they could take the Colts’ place. Only the Patriots and the Steelers would say otherwise. Getting to the Super Bowl is tough. Just ask Dan Marino.