You are here: Home > Zachrilege Cast > Zero to hero
By Zach Law on March 17, 2010 in Uncategorized 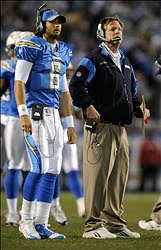 I have to shed some light on one of the most unlikely coveted free agents in the NFL. This is a man who I only know from a video game and through last year won the award as the luckiest guy in the league.

He is Charlie Whitehurst. Whitehurst has been the San Diego Chargers’ third-string quarterback since 2006. The Chargers selected him in the third round of the 2006 draft. He played in four games during his rookie season and has not seen the field since. This is a man who has drawn a nice NFL salary to not play and live in San Diego for four years. Yeah, I’d call that fortunate if not out and out lucky.

One interesting stat from Whitehurst’s career is that he has two NFL rushing attempts. One was for a touchdown. It was September 17, 2006 when the Chargers beat the Titans. Ironically, this was also the game in which Vince Young threw his first NFL touchdown pass. Titan QBs went a combined 13-39 in a 40-7 rout. The following week the Titans traded Billy Volek to the Chargers and Whitehurst became third stringer for life.

This year’s weird free agency has changed things. Teams are interested in picking up Whitehurst. Is there any difference between him and a rookie? He’s been in a good offensive system for the four years. He is a QB with a pulse and must be coveted. The Seahawks and Cardinals have shown interest.

The teams must hope that Whitehurst is this generation’s Trent Green. Green was drafted by the Chargers in 1993. He did not get into a game until 1997. In 1998, with Mike Martz as offensive coordinator, Green got his shot. He was going to be the field general for the Best Show on Turf in 1999 but cheap-shot artist Rodney Harrison hit him low in the preseason and ended his season. Green finished with two playoff appearances and two Pro Bowl selections. That’s the high water for Whitehurst.

I remember Whitehurst from the last year I played the EA Sports NCAA football. I had led the Chattanooga Mocs to an impressive 10-1 season. We accepted a Champs Sports Bowl invite against the Clemson Tigers. The QB for Clemson was Whitehurst. He had a rating of 98. He was unstoppable. I must have stopped him once or twice because the Mocs pulled out a tough 38-35 win.

Whitehurst was highly touted after a solid sophomore year. His junior stats were Vince Young in 2007 terrible, seven touchdowns to seventeen interceptions. He was somewhat better as a senior.

It is unusual to see such interest in a guy whose first pass in a regular season game would be his first. I’m sure a deep-digging NFL addict could find his preseason stats and that might show an unseen value in this unknown quantity. Maybe the Titans should reunite him with Young. They are forever linked, after all.

Smacked down
The League: Bringing the funny