You are here: Home > Zachrilege Cast > Titans and the draft
By Zach Law on April 21, 2010 in Uncategorized 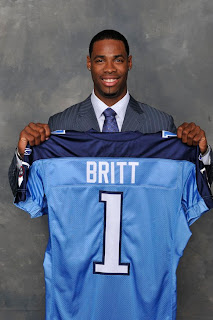 Zach’s quick state of the Titans’ franchise and who they will draft. Yes, I’m that good.

QB: The Titans have three quarterbacks under contract. One is excellent at holding a clipboard and looking really interested while Mike Heimerdinger talks to the starter. Two are not. I would love the Titans to draft a developmental guy in the VY mold but they already have three guys and usually two’s the limit when the season starts. Is Alex Mortensen still available?

RB: You have CJ. You have LenDale. That Ringer guy might be OK. Maybe they take an UDFA but this team always seems to draft a RB at some point.

FB: You have The Marine. Who else do you need?

OL: Yes, I prefer to write about skill-position guys. The starters are set and Kevin Mawae might return. Heck, Daniel Loper might return. I wish some of these guys could play corner or DE. I could see a developmental OT or guard at some point.

TE: The team has three guys under contract, which is never enough. Watch them draft some obscure blocking TE that no one’s heard of in the third round.

WR: The position is stronger than it has been since the Derek Mason/Drew Bennett days. Which means they are only mediocre now. I’d love to see them draft a guy who could catch a punt and run forward. Guys like Chris Davis don’t grow on trees.

DT: Unless there’s a draft-day deal for Haynesworth, I feel like this position is set. We shall see.

DE: Please? Pretty please? Except for Jevon Kearse, this is a position that doesn’t produce immediate dividends. I could see two defensive ends drafted at least.

LB: Witherspoon’s here. Keith Bulluck may get re-signed. Gerald McGrath is the most bad-ass Gerald on the planet. Stephen Tulluch is pretty good. Is David Thornton still alive? I suppose they could take an OLB.

CB: Unless last year’s draftees have really improved, this is a huge need. The team concentrated on signing backup-caliber guys in free agency.

S: This didn’t seem like a need before last year. It would be nice to get a replacement for Chris Hope who could start in a year or two.