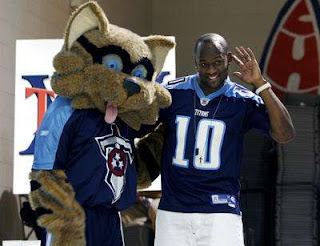 Photo caption: The Titans have an All-Pro QB and mascot. But in today’s modern National Football League, you need more.

I want to give my opinion on the Titans’ draft. Here’s the rub. I’ll admit beforehand that I have almost zero basis for rating each player. In most cases I have never heard of the players they took.

Here’s the problem with reviewing drafts right after they happen. No one knows anything. People pretend that they know things and certainly the folks who have attended the all-star games, watched films and talked to the players and the scouts have a leg up on the rest of us.

That’s the dirty secret of draft grading. People have wised up to the fact that draft grades are practically worthless, but they must have them. You can’t be called a draft expert without them.

The Titans got a middle of the road grade from most graders. The main reason for that was they did not take any “name” players and they traded their second-round pick to the Patriots. The amazing thing about the draft is that the Patriots traded the exact same spot in the third round, the 89th pick, to the Panthers for a 2011 second-round pick. They did it again! Someone stop them.

I was happy that Jason Paul-Pierre, the athletic freak with no stats to back his lofty draft stock, went in the pick before the Titans. I think the Giants are heading toward a seven-man defensive line since they seem to only draft guys from that position. Paul-Pierre can do backflips on the field. That’s so useful in a game situation. He could be a perennial all-pro. He did take Jevon Kearse’s number so there’s some wishful thinking involved. The Titans took Derrick Morgan with their pick. The first issue with him is that he has a boring name. It’s no Paul-Pierre. He is a junior from Georgia Tech so it’s possible that he will develop slowly. It was a need position and he did produce in college. That’s really all you can say.

Oh yeah, every team acts like they are shocked when a player falls to them and that the other 31 scouting departments are filled with people who want to invite Justin Bieber to their birthday party. Damian Williams was the third-round pick. He was a highly decorated high school player who couldn’t make up his mind. He originally committed to Florida, then went to Arkansas for a year and finally transferred to USC with Mitch Mustain. It worked out for Williams. He’s another junior. Not a burner and struggles with press coverage, as probably 99% of college players do. He feels like a good player.

The Albert Haynesworth memorial compensatory pick was Rennie Curran, outside linebacker from Georgia. One of my pet peeves about draft coverage was that when a player was selected in the first round the NFL Network showed a combine workout. How about showing the player actually playing football? Curran was shown playing football, which I say is a good thing. He’s short. I noticed that. Since I live in Georgia I have plenty of biased opinions on Curran. He’s a tackling machine, fast, and the only defensive player worth a damn from that horrible 2009 team that went 8-5. It’s interesting how the Dawgs went 8-5 and the season was a disaster, whereas the Vols went 7-6 and that was good enough to get the head coach promoted to USC.

Yes, the Titans drafted a Georgia Tech and a Georgia player. Dogs and cats living together. Mass hysteria.

The trade of LenDale White and Kevin Vickerson was curious at best. White scored 15 touchdowns in 2008 and followed that up with two in 2009. He wanted to be the man, as he was in a 1,000-yard campaign in 2007. He was not going to be the man anymore and didn’t want to continue to play the dust-gathering backup to Chris Johnson.

Seattle was a logical destination, what with their ex-USC coach and absolute lack of an NFL-caliber starting running back. The throwing in of Vickerson in the deal tells me a few things. Seattle wasn’t that interested in White. The Titans thought they would save a few bucks by having Jim Washburn work with a rookie rather than Vickerson, who is a rotation guy and a fine veteran but not a difference-maker. That’s what the draft taught us. If you’re not a difference-maker, you will be traded for a bag of balls.

Fourth-round pick Alterraun Verner sounds like a name that George Lucas let his sons make up. He’s a cornerback, and if he’s starting that means that last year’s two cornerback selections were bad. Rod Hood may start.

Since neither Chris Hope nor Michael Griffin played worth a crap last year, it makes sense that the Titans used late picks on Robert Johnson, a FS type from Utah and Myron Rolle, a SS type who famously spent a year at Oxford as a Rhodes Scholar. Tebow ain’t no Rhodes Scholar, he’s a football player. Sorry.

I didn’t like the Rusty Smith pick. Here’s why. Wouldn’t it make sense for the Titans to have a backup QB with a similar skill set as its starter? I am not a draft expert and would not be caught dead watching game film unless it’s a replay of a Titans game on the NFL Network. Dan LeFevour at CMU was a four-year starter with some skills as a runner. Rusty Smith was fine at Florida Atlantic, leading them to two bowl games, but he’s a pocket passer. He’s Kerry Collins, minus a lot of talent. The Bears picked LeFevour. Sorry, dude.

Marc Mariani and David Howard, the two seventh round picks, have a better shot of making the team after the Vickerson/White garage sale trade. Mariani has return skills and must be oodles better than Freddy Barnes and Danario Alexander, who combined for 268 catches, 3551 yards, and 33 TDs last year as college seniors. I suppose he can return kicks. Howard is a DT out of Brown and will replace Vickerson if he makes the team.

Lacking a third RB on the roster, the Titans signed LaGarrette “punchy” Blount and Stafon Johnson as rookie free agents. Unless some veteran chum like Julius Jones signs, one of these guys will be make the roster. Otherwise, if it’s not a skill position player, I’m kind of lost.

The team seemed to address their biggest positional needs. The defense got a lot of attention as was deserved. Zero offensive linemen were selected. I didn’t necessarily like the guy, but the Titans like lots of teams in the league decided that a late-round QB flier was a good idea. And in a major shocker, no blocking tight ends were picked.

Titans and the draft
Can two "Days" coexist?