You are here: Home > Zachrilege Cast > What to do in the late rounds
By Zach Law on May 16, 2010 in Uncategorized 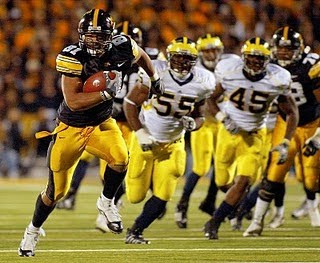 A dynasty rookie draft can be a bit like Christmas. You know that you have a set number of packages to open and you want them all. The urge to trade for picks now and lose picks later is fairly large. Trades happen in bunches and it makes you wonder how your roster is set up and if you have a real plan. There is planning involved. You can’t just take players that will help immediately. A guy like Miles Austin is a great example. No one drafted him in a rookie draft, mainly because he was undrafted in the NFL, but picking him up as a “lottery ticket” and waiting would have paid off handsomely.

I listen to The Audible. It’s the footballguys.com podcast. During this week’s two-hour show Sigmund Bloom said that during his dynasty drafts he rarely takes defensive players. He is one of their IDP experts, so it perked up my ears a bit. IDP fantasy does make the game more complex and interesting. Still, you start more offensive players and they almost always score more points, so they are more valuable. In the late rounds it makes sense to take a shot at a WR, QB or RB who may take years to develop if they develop at all, even over a sure starter at a defensive spot.

That was my mindset for my latest picks in the fifth round. I traded a fourth-round pick last year to get the Pu Pu platter of Kevin Jones and his detached ACL. I got a fifth round pick as a throw in in another deal and my own fifth rounder. I made my first-ever remote pick when I realized it was my turn to draft but I was about to go to a wedding. Since I have not mastered my phone web thingy I called my dad and had him put in the pick for me. I would have taken Brandon Graham, as MFL has him listed as a LB and not a DE which will be his position in the pros. MFL putting in an incorrect player position helped me in the past. He wasn’t there so I went with Tony Moeaki. The Chiefs don’t have a good TE on the roster and Moeaki was at Iowa, which means he can block and they had a guy named Dallas Clark there a while back. When Chris Cooley went down last year I was sunk. It’s a deep draft for tight ends, at least it looks like it.

With my latter fifth-round pick I went WR. Another underrated aspect of a rookie is their ability to contribute on special teams. Return points can be critical on heavy bye weeks and as a tiebreaker when ranking players. Jacoby Ford is such a Raiders player. He’s the fastest guy in the draft and they’re not exactly stacked at wideout. He’ll return kicks and while he may be no Yamon Figurs, it’s worth a shot at this point.

Actually the auction we do after the draft might be more exciting than the draft. Every year it yields a couple of studs, like Marques Colston back in the day and Johnny Knox last year. It’s worth it to drop some roster chum like Kevin Jones for a shot at players who can contribute. This is when to add IDPers who can easily be dropped on opening day if need be.