You are here: Home > Zachrilege Cast > Fenway, oh Fenway
By Zach Law on May 22, 2010 in Uncategorized 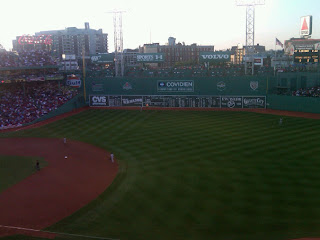 When I suggested to a vendor that it might be a good idea for us to fly up to Boston for a day, I threw in as a lark a reference to them being able to get us Red Sox tickets. I did not think that they would actually produce them. A week later, we were in.

Overnight business trips are hectic by nature. I got up at 5, made it to Marta by 6:30 and was at the terminal by 7. Is there anything in America like the Atlanta security line? It’s long and snakes around like you’re waiting to get on a rollercoaster. It is fairly quick. I felt like I had a ton of things to put out with my laptop, two bags, toiletry bag and shoes. We should just get airline-issue smocks and slippers when flying.

We got to Boston at 11 and to our destination at 12:30. This is my idea of a work day. We had lunch, one 90-minute presentation and that was it. After checking in to the hotel we found out that Atlanta has a serious competitor when it comes to rush hour traffic. It took us an hour and a half to get to Fenway. The first parking option was $50. We drove around and found a spot for $40 and felt like that was as reasonable as it was going to get.

A Red Sox game is hard to compare for atmosphere. It’s almost like a college football crowd. There’s an area with shops and such after you show off your ticket, so you can party pre and post game. We went to a bar with our hosts and had a couple of beers. We got in the stadium in the first inning.

The seats were incredible. They were high down the first-base line with a direct view of the Green Monster. We sat on stools and had kind of a counter on which to put our food and drink. We had a waiter take our order. I took a picture for my phone and posted it online but Steve had a nice camera and took tons of pics. The game was fun. The crowd was into it. The Sox won in a blowout and Lester looked great, hitting 95 on his 96th pitch. After the game we went down to the field level to get more pics and soak it in. This was a random Thursday night in May but it felt like a playoff game.

The drive back was rough. Traffic was ten times worse than any Titans game. The game ended before 10 and we got to the hotel at 11:30. It didn’t help that we got lost.

My recommendation is to go to Fenway. I assume there are other baseball experiences that are must-sees but this has to be at the top of the list.

I woke up at 5:30 because the sun was already coming up. I slept a little longer and got ready for day two. I won’t have my computer although I doubt that will be an issue.