You are here: Home > Zachrilege Cast > Black Monday in Titanland
By Zach Law on June 15, 2010 in Uncategorized 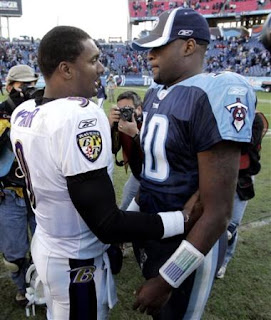 It was Black Monday in Titans camp. Three bad omens for 2010 came across. Rod Hood, picked up in midseason last year to start opposite Courtland Finnegan, tore his ACL. He wasn’t going to be more than a depth player, but his starting experience would be valuable for Jason McCourty and Ryan Mouton. Now he’s officially done for the year.

Titan fans were gleeful, perhaps too gleeful, when news came out about Brian Cushing’s positive drug test and four-game suspension. Part of it was pain inflicted on a division rival, but it went further when Cushing refused to take responsibility. Just like there are no really guilty men behind bars, no one who failed an NFL drug test actually took a “bad” drug. It was just some supplement. Know your supplements. I’d have everything I consumed independently tested. Chris Henry, the once and forever horrible second-round draft pick, allegedly failed a drug test for taking Sudafed. Next time, consider some chicken soup. To be safe, don’t have the kind with MSG.

Gerald McRath will miss the first four games of the season due to a positive test. He’s playing the supplement blame game. You took it, so it’s your responsibility. McRath had the inside track to taking David Thornton’s strongside linebacker role. Who’s going to take it now? The dark horse candidate would be . . . David Thornton, who now can play the NFL version of “I’m not dead yet”.

Vince Young’s the final piece of the puzzle. After his hockey brawl at a strip club, he publicly prayed that Roger Goodell show mercy. Vince, you better focus your praying on the Commish and not anyone up above, because the Commish has more power. If there’s a two-game suspension, say, and Kerry Collins wins both, it might be 2008 all over again. Next year’s draft is supposed to be QB heavy. The Titans would be wise to consider a fall back option.

This just in: Vince swings
Time for the Titans to "make it rain"