You are here: Home > Zachrilege Cast > Time for the Titans to "make it rain"
By Zach Law on June 16, 2010 in Uncategorized 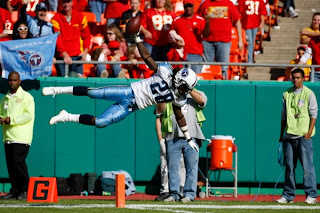 This game of contract chicken that the Titans are playing with Chris Johnson needs to come to a conclusion. I know you don’t renegotiate rookie deals for guys who are only two years into a five-year deal, when the team has paid out most of the bonuses and only base salary remains. The Titans took a chance on him and deserve to get him on the cheap. At the same time, CJ’s done something that only half a dozen NFL running backs have done in history. He had nearly 250 touches in the second half of 2009. In 2000 the Titans gave Eddie George the ball a staggering 453 times. Are we surprised that he couldn’t top 3.4 yards a carry for the rest of his career? In the final ten games of 2009, CJ had 297 touches. That’s about a 475-touch pace. The team gave him the ball all the time. Is there a reason why he had 31 touches in a 47-7 rout of the Rams? Because he was money.

Chris Johnson was the only reason to watch the team last year. Vince Young was fine, and his 99-yard game-winning drive was a thing of beauty. I’ll take Chris Johnson’s 85-yard run over that every day and twice on Sunday. He’s the reason why my parents keep paying for season tickets. He has to come to training camp on time.

I know it’s a rough time to try and work out an extension. The 30% rule is only an obstacle. It can be overcome. The thought of paying CJ a ten-figure signing bonus when there could be no 2011 season is sphincter-tightening for any GM. If you pay him now, you’ll pay him a lot less than if you wait until next year, lockout or no lockout. He’s going to get something in the crazy range of seven years and $60 million, with half of that in signing bonus. Sign him today and the number’s a lot smaller. It’s a risk, but to achieve greatness you have to take risks.

I don’t want acrimony between the star player and the team. I also don’t want my brand new super purty CJ authentic Oiler throwback jersey to be a waste of my closet space. The window of CJ’s greatness could close at any time. If you’re going to have Javon Ringer as your backup, we are on the verge of seeing another 400-touch season. Had the Ravens not tried to tear him in two and injured his ankle in the 2009 playoff game, he was on pace for a 300-yard game. That would have been a legendary performance and Jeff Fisher’s usual playoff field goal mentality would have been out the window. You pay for the opportunity to see that performance again. The only way out of 8-8 land is a healthy and happy CJ. Do what it takes, Mike Reinfeldt. Make it rain.