You are here: Home > Zachrilege Cast > Join the bandwagon
By Zach Law on June 23, 2010 in Uncategorized 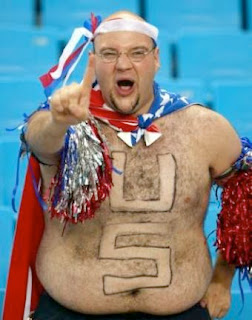 Today the country (or at least the sports fans in the country) rallied behind U.S. soccer in a way that has been unseen since the 1994 World Cup. If you wonder why soccer has failed to truly reach the hearts and minds of the American sports fan, it’s simple.

We didn’t invent the game.
Let’s look at America’s top sports. Football is completely an American game. It barely has a toe hold in any other country. OK, Canada likes football, but they have their own rules and probably took over the sport so we would let them keep a few token NHL franchises. Baseball is American, although it has plenty of support in Asia and Central America. It’s still ours to the point that the MLB champs call themselves World Champs. Basketball is ours. Seeing as I’m now renting to a guy who used to play basketball in Switzerland and Turkey, this is a world sport. It’s still an American sport.

Hockey? We only care when the team in our town or our home town is in the Stanley Cup finals. Note that the national spelling bee championship had a higher rating than playoff hockey. Golf? Yeah, we like to play it because it’s an excuse for guys to be guys and drink during the day. Tennis? Yeah, we barely care when there’s a match that’s heading into its 119th game in the final set.

At least Tennis knows how to do a tiebreaker. I was captivated by the story of David Vanole, who was goalie of the U.S. team that qualified for the 1990 World Cup and paved the way for the country hosting the event in 1994. He played at UCLA and was involved in a championship game that had two 45-minute halves and seven 10-minute overtimes. You mean that World Cup soccer couldn’t just keep playing instead of going to penalty kicks? Let teams add one sub per overtime period. Come on.

The game today was great because it was what we want out of a sporting event. We want near misses because the final success is that much sweeter. The U.S. team was superior today, the first time we could say that in a couple of Cups. They almost gave up the trademark early goal in the sixth minute. They were denied again on a questionable call. I can’t fault the refs. I fault the system that doesn’t have a system to review offsides (could be done) and makes one referee cover so much ground. The goal at the end was like a fast break in basketball. Howard got the rebound off the missed shot, threw the ball out and every subsequent pass was on the money. The Algerian goalie made a heroic effort for the save but Donovan was there to bury the winner. And even after that, if Algeria had scored the U.S. would have gone from top of the group to out of the tournament. Americans love sports when the stakes are high.

I’ve been with the team all along, but I’m happy to see the bandwagoners. Who’s up for some quality time in the man cave this Saturday? Ghana, you’re next.