You are here: Home > Zachrilege Cast > Fantasy files: Clearly the best
By Zach Law on June 25, 2010 in Uncategorized 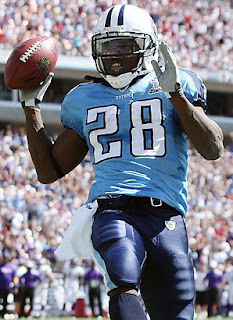 My big draft is in about six weeks. I have about 13 players ranked. When I compared my player list to the average draft position so generously provided by footballguys.com, I noticed that my rankings were almost identical to the rankings based on a lot of drafts. I wanted to rebel and drastically change my rankings but when it comes to the top guys, shouldn’t there be a consensus? My rankings will surely diverge by the time we get to the 30s.

I read an article recently stating that Adrian Peterson should be taken over Chris Johnson to lead fantasy drafts. I know there are off the field issues. It’s June, folks. If he’s holding out in the second week of August, it’s time to panic. Adrian Peterson is great and there’s nothing wrong with taking a player who has finished third, third, and second in his three years. Favre should be back and rookie Toby Gerhart should take the Chester Taylor workload. He didn’t even get 320 carries, although he had more than 400 touches if you count playoffs.

I watched every Chris Johnson carry last year. I even watched when he had 128 yards in the 59-0 loss at New England. He is a threat to score on every play. He played tougher than his somewhat undersized frame would indicate. As a guy who’s about to get a major pay day, either this year or next, he has the motivation. I know that it’s hard to repeat as the top fantasy scorer. I also know that Marshall Faulk and LaDainian Tomlinson played at a high level for years. Johnson’s on the level. Luckily for guys who have a top three pick, so are ADP and MJD. I’d be perfectly content for any pick in the top three. If I’m at number one, it’s Chris Johnson all the way. That’s one ranking of mine that is unlikely to falter.