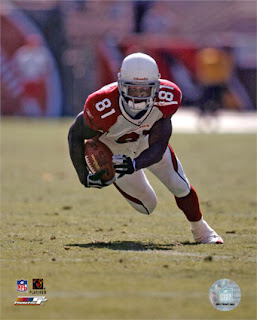 Is Anquan Boldin a product of the Arizona system? In his rookie year, Boldin was one of the greatest waiver-wire pickups in fantasy football history. He was the second wideout drafted by the Cardinals, and he finished the year with 101 catches for 1377 yards and eight touchdowns. He was the fourth rated wideout. In his following six years, he has not finished higher, and only once has he played 16 games.

Here’s one little detail that shows how fickle ratings are. Between 2008 and 2009 Boldin caught five fewer passes for 14 fewer yards. He scored six fewer touchdowns and that was the difference between a #7 and a #23 finish.

This year he goes to Baltimore. He leaves a team that finished third in pass attempts and moves to a team that was 25th in pass attempts last year. That’s a negative. He goes from being a #2 guy, although most of the time he was more like 1B, to number one in Baltimore. That’s assuming that the unretiring wonder Derrick Mason gives up the mantle. Mason caught 73 passes last year, second to Ray Rice’s 78. One thing most fantasy followers agree with is that Rice probably won’t catch 78 passes this year. Boldin, and to a lesser extent Donte Stallworth were brought in to ensure an increase in downfield passing.

The question is whether the Ravens can support two top-20 wideouts. Derrick Mason has been in the top 20 range for three years in a row. So has Boldin. He’s currently at WR#15 and overall #41. Would you use a third-round pick to select him? Mason at WR#39 and overall #110 seems like the better buy, even at age 36. Mason hasn’t missed a game in seven years.

In the past, Boldin has been a consideration for a WR1. This year he’s a WR2. Mason’s a WR3, one of those boring vets lumped in with Donald Driver and Hines Ward. Sometimes wide receivers are too old to fail.